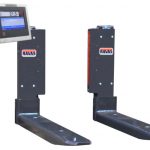 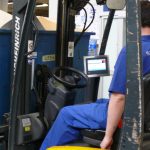 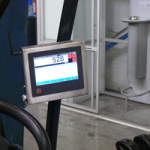 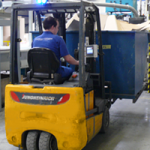 iForks Touch is made for complex applications

iForks Touch is highly adaptable to complex applications that include data collection on the lift truck. The scale allows integration with dimensioning devices and can communicate directly with WMS or ERP systems.

iForks Touch can optionally be fitted with automatic tilt correction, for weighing when the forks are not in horizontal position, e.g. when the truck mast is tilted forward or backward. This ensures high accuracy in any mast position and ease of use for the lift truck driver, without interrupting the process.

The touchscreen indicator has a configurable user interface and offers optimum usability. Different applications can be called up over the touch screen: weighing, data input, counting, totalizing and recipe weighing. Only those keys actually in use for the application are visible on the screen.

Intelligent Ravas iForks Touch touch app calculates load center point. Long loads, e.g. crated machinery, often have load centers that are not positioned in the middle of the load. This may lead to dangerous situations when lifting or moving them, with loads tipping over. For this reason, the load center point of such loads is determined and marked with a special sticker. When shipping such loads, the forwarder is responsible for proper marking. But how can the forwarder accurately know the position of the load center?