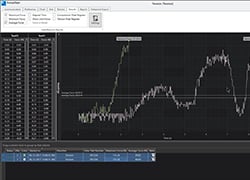 The Chatillon ForceTest Force Measuring Software interfaces directly to your digital force gauge enabling you to automatically perform tests and graphs using a personal computer. Test results and live graph can be monitored directly on the screen while the test is running.

Featuring a colorful and intuitive user interface this force measurement software ensures that tensile tests, compression tests, torque tests, peel tests and friction tests are simple to set up. By the click of just a few buttons basic force measurement such as pull to break, pull to limit, compress to rupture and compress to limit is quickly performed.

Adding pre-test questions is simple and results details such as maximum force, average force, elapsed time, limit force and peak force can be set to display in the live graph.

Test results are presented in a spreadsheet format allowing you to analyze data and perform common mathematical and statistical calculations. Results can be exported to Excel. Graphs and test results can also be exported directly to PDF and Word formats.

The Chatillon ForceTest Force Measuring Software is Windows based and operates using the latest Windows 8 and 10 operating systems.

The ForceTest software is compatible with the Chatillon DF II Series and the previous generation of the DF I Series replacing the NEXYGEN DF software. This allows users of older models to upgrade their force gauges at a low cost.

Download the free ForceTest software trial hereto experience how easy it is to use. 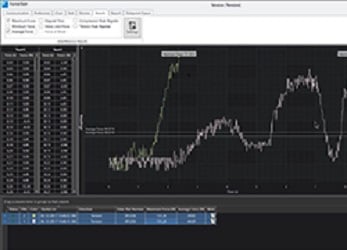 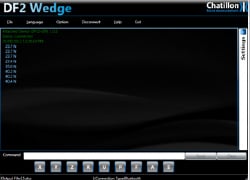