CW-90 Checkweighers are the First Step to Mushroom Production Automation

Whitecrest Mushrooms Ltd. Farm in rural Putnam, Ontario, has one of the most high-tech mushroom plants in the world — with a mushroom production total of two million pounds of brown mushrooms a year. Nevertheless, people still do the picking. It takes several months’ experience and a practiced eye to know when to pick a button crimini and when to let it mature to a steak-size portobello. Perfectly ripe mushrooms vary from small buttons to large caps.

Murray and Chantelle Good purchased the farm in 2001. In June of 2010, lightning struck the nursery building, and it burned to the foundation. Murray turned the loss into an opportunity—by building a bigger, better nursery. This time around, Murray wanted a completely automated system that one day would produce controlled, traced mushrooms not touched by human hands between picking and purchase. The less mushrooms are touched the better—for both mushroom and bottom line. To Murray, employing the system of 22 CW-90 checkweighers is a major step in reducing the handling of mushrooms.

“Mushrooms are fungi, but they are commonly thought of as a vegetable—so we’re competing with other vegetables,” Murray explains. “Our price is high in comparison because our cost of production is high—50 percent of our total expense is labor. We want to get that down to 25 percent. With robotic-picking, we can pick twenty-four hours a day. Every hour a mushroom grows four percent, so in a day it doubles in size. If we’re picking twenty-four hours a day we’re getting more efficiency out of our beds.”

Mushrooms are the only “vegetable” that makes Vitamin D itself. “We can enhance that with UV light. We also make a mushroom powder that companies use to enhance soups, sauces, yogurt, and bread. Mushrooms are a good source of umami, so instead of adding salt, mushroom powder can be added for a savory flavor.”

Umami is one of the five basic tastes together with sweet, sour, bitter, and salty. Umami is a loanword from the Japanese word meaning “pleasant savory taste.” The human tongue has receptors for L-glutamate, which is the source of umami flavor. As such, scientists consider umami distinct from saltiness. For a long time, scientists debated whether umami was indeed a basic taste, but in 1985, at the first Umami International Symposium in Hawaii, the term umami was officially recognized as the scientific term to describe the taste of glutamates and nucleotides. Now it is widely accepted as the fifth basic taste.

“The Rice Lake system fits right into our plan to progress to robotic-picking. We’re working on it with the University of Western Ontario’s engineering department to get that developed over the next four years. The technology is there. We already have video recognition, color recognition, temperature recognition, and suction cups to pull off the mushrooms. We just have to put it all together.”

The first step to robotic-picking is the CW-90 system designed and installed by Carlisle Technology. Whitecrest Mushrooms’ 22 CW-90s are wirelessly connected to the host and mounted on carts that roll along the aisles and can be elevated so the picker has access to all seven tiers of mushroom beds. “Most of these checkweighing systems are looking for overweight containers, to eliminate giving away product. There was lots of customization on the CW-90. We got a lot of good attention from Ian.” Ian Scott is the Rice Lake Regional Director in Toronto.

Whitecrest’s Matthew Leader gives public tours for mushroom-lovers. “We grow Crimini to Portobello—brown Agaricus mushrooms. The customer base wants small or big—nothing in-between. We pick button mushrooms with tight caps. Some we leave a couple of days, and they become baby Portobellos and larger Portobellos. We now have huge sales of open caps. If we don’t come into a growing room for a weekend, we have some that grow to seven or eight inches. As they grow larger, the flavor becomes more mature and richer. We package those and people swoop them up.”

“As soon as the pickers weigh a box and a label is printed, it sends a signal to the server upstairs so I can see the labels as they are printed. The system tracks giveaway—we can see what the actual weight is and what it is set for. With the weighing being done in the grow rooms, we save pack room time, and it doesn’t have to be touched again. We would like to eliminate the packing room. That’s what we’re going for. The traceability is a bonus. Our retailers are not demanding it, but it’s coming, and we’re ready for it.”

Rice Lake’s CW-90 checkweigher is designed to speed up the weighing process and reduce production downtime. Ease of use, ability to collect real-time data with the optional wireless LAN card, and stainless steel construction make the CW-90 the equipment of choice for enterprises like Whitecrest Mushrooms.

Some of the unique aspects of this CW-90 application are that it directly drives the printer, printing a 2D barcode with traceability information (station, picker, lot code, product code, and best-before date). Each transaction is sent wirelessly from the CW-90 to Carlisle’s Symphony™ Plant Productivity Suite. It coordinates all the CW-90 stations, ensuring that they have the latest product information (individual product set points, tare weights, and bestbefore dates). The label is applied to the mushroom tray and is scanned at Carlisle’s iCap station where the trays are packed into boxes, providing full traceability from the box back to the picker and the grow room. Whitecrest uses the reports from Symphony to keep track of inventory, production, and to assess picker productivity, which they use for paying their pickers and managing labor costs.

Ian sells the CW-90 with great confidence. “The CW-90 is the most feature driven checkweigher on the market. It’s practically indestructible. Connectivity is the name of the game, and the CW-90 has more connectivity options than any checkweigher in the industry. These CW-90s are bullet-proof. We’ve had no problems with them at all. Let’s say they’re saving us 10 percent a year; that’s $200, 000 we’re not giving away.” 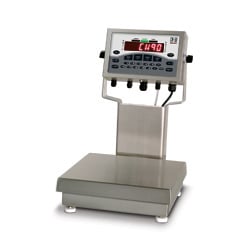