When 1983 Wisconsin wrestling Hall-of-Famer, Larry Marchionda retired, his phone kept on working.  His former wrestlers (now coaches and teachers themselves) would call, saying, “Hey, Coach, where can I buy those…” about some piece of equipment that Larry could vouch for. “So I started a little website.” That is Larry’s definition of a widely respected source of wrestling equipment, technique, and information— World Class Wrestling Enterprises, LLC. He carefully chose manufacturers, and Rice Lake Weighing Systems is proud to be one of Larry’s picks.

Larry has a long and personal history with scales. He remembers the 1950s when wrestlers weighed on portable beam scales. “Then it was the doctor’s-office-style balance beam.” Larry says some schools were notorious for having “fixed scales.” “They filed the notches on the beam.” Weighing technology today will not allow cheating. In fact, high-resolution electronic scales will capture fractions of ounces as well as body composition information.

Larry thinks about his own reputation as well as the reputations of the manufacturers he chooses to represent. “People like me and trust me, and I don’t want that to change. And I don’t want phone calls from disappointed people.” Today, Larry is the wrestling administrator at the University of Wisconsin, Oshkosh campus.

There are only five manufacturers on Larry’s World Class Wrestling Enterprises site. If Larry tries a manufacturer and gets complaints, the company is eliminated. “I want the company to be customer-friendly and stand behind their products. I want them to be easy to work with. And I want delivery within a business week. The thing I like most about Rice Lake is they continue looking at how to improve their product. I know when a new version is available, it’s improved.”

Friend and colleague Rich “Woody” Carlson is the supervisor of the Wisconsin Interscholastic Athletic Association (WIAA) State Wrestling Tournament and has first-hand experience on the mat. When he was 12 years old, Rich wrestled in middle school and later in high school, though he didn’t make the team in college. Rich went on to become a wrestling official, starting with being a “mat-runner” at tournaments, tapping the referee on the shoulder when time ran out. Today, he manages the Wisconsin state and individual tournaments.

Wrestling has changed since the days Rich weighed in. “Today, wrestling is much more about technique. You still have the same basic holds that were developed hundreds of years ago. You still need a good take down, a good break down, and a good pinning hold, but there are more styles of wrestling and new holds have been developed for certain body types.

“Kids of any size or weight can become talented wrestlers. I was tall and thin but I wrestled at the lowest weight. I needed to use my long arms and legs to get leverage, rather than relying on upper-body strength.”

Rice Lake Weighing Systems supplies Legal-for-Trade portable fitness scales for the state wrestling tournaments, and Rich says they are always accurate. “We have to put them on hard floors and sometimes carpet. They’re very convenient to move and durable, and they save a lot of conflict because they all agree with each other.” That is important because if a wrestler does not “make weight,” he is allowed to step on all the scales present. If any one of the scales indicates a qualifying weight, that wrestler has made his weight class.

The Rice Lake 140-10-7N Portable Fitness Scale used at the wrestling tournaments is an NTEP Certified Legal-for-Trade scale that provides the highest possible accuracy. It has a 600lb. capacity even Sumo wrestlers won’t challenge— even though it weighs only 20lbs. 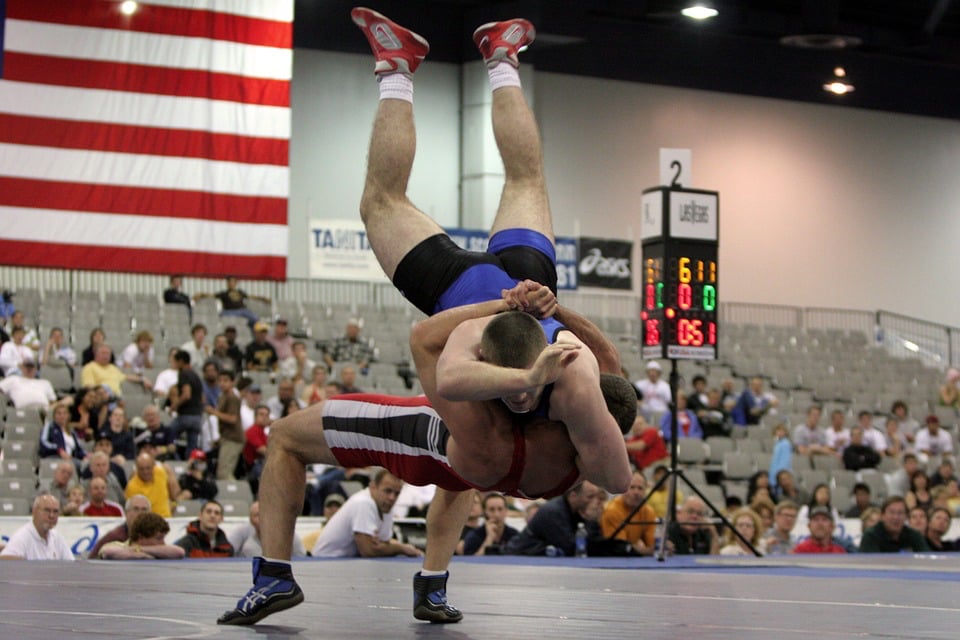